Clever design and a quality build

“For a budget lens, the build quality of this Pentax lens feels particularly good, and it’s the only lens in the whole group to feature weather seals. It’s big on zoom range, equating to 82.5-450mm on a Pentax APS-C-format body in 35mm terms, yet its build is physically small when stowed away; this is thanks to a clever retractable design that enables the lens to collapse down to just 89mm in length. It also features a stepping motor autofocus system, the near-silence of which is an improvement over some of Pentax’s notably noisy lenses. There’s no optical image stabilisation, with the lens instead relying on in-camera stabilisation, which is present in all modern Pentax DSLRs. The autofocus system is quick and highly accurate, and testing the lens on a K-70 body, we found stabilisation to work well, with a four-stop effectiveness. Despite having the outright biggest zoom range of any lens in the test group, image quality is excellent.”

You can check the whole article at digitalcameraworld.com “The overall appearance and feel are quite similar to the 18-50mm retractable lens that we have already seen. A single easily operated button releases the lens barrel so that the zoom ring can be used. If the camera is switched on whilst the lens is retracted, the shutter release is disabled and a warning message appears on the rear screen. The release of the zoom ring is, like the first lens, quite jerky and stiff in operation, hardly smooth. However, the standard of assembly of the lens, in general, is high, and things do ease up a little once the lens is in use. In contrast, the manual focus ring, which lies closest to the body, is as smooth as silk from the start, operating electronically and also offering QuickShift, where manual focusing can be used to tweak the AF position focused on.

There is little else to see on the lens. The front element is surrounded by the 58mm filter thread and also the bayonet for fixing the provided round lens hood. The hood has a removable slot that allows filters such as a polariser to be rotated without removing the lens hood. The HD coatings reduce flare and the front element is also given an SP (Super Protect) coating to repel grease, dirt and water. The diaphragm has 9 rounded blades to improve bokeh. Weight is 442g or 471g with hood. This is virtually the same as the previous 55-300mm lenses.” “The Pentax 55-300mm F4-5.8 has long been a popular choice among Pentax users— its solid image quality, convenient zoom range, and low cost were difficult to match. However, as the lens design dates back to 2008, it lacks quick or silent autofocus, and instead relies on the classic screwdrive mechanism.

2016 brought us a new lens which addresses this issue: the Pentax 55-300mm F4.5-6.3 PLM debuts the PLM motor, which delivers the fastest autofocus in any Pentax lens to date. In addition, this new lens is smaller (thanks to a collapsible design) and lighter. But does it live up to its predecessor’s image quality? Will it be the new go-to lens for entry-level telephoto shooting? Read our in-depth review to find out!” 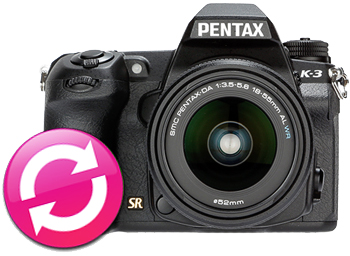 RICOH IMAGING COMPANY, LTD. wishes to announce the release of Firmware Update Software Version 1.30 for PENTAX K-3. Firmware in this document is the software that runs inside digital cameras.

*Contents of [Version 1.21] and earlier version will be also updated.

How to check version

The firmware version for camera is displayed on the [Firmware Info/Options] screen.

*Be sure to use fully charged battery (D-LI90)
If the camera turns off during updating due to lack of battery power, the camera will become inoperable. If this happens, a charge will be made for repairs even if within the warranty period.

[Caution]
When updating is finished, the update SD card still contains the Firmware file.
If you want to use this card to take pictures, format the card by the camera to delete firmware file first.