“A 360-degree camera is great if you want to capture the full view of the summit on Half Dome or take in all of the surrounding architecture in the Piazza San Marco in Venice and share that experience on Facebook or YouTube so friends can pan around a scene and fully be there in the moment. After researching 360-degree cameras for 30 hours and testing four top contenders, we think the Ricoh Theta S is the best affordable, user-friendly entry point into this rapidly-developing new category of photography.” “Tucked away in the Theta camera section of Ricoh’s booth at CP+ is an interesting demonstration highlighting a unique image processing technology that combines a Theta 360-degree camera and the full-frame Pentax K-1 DSLR. The result is a rather cool multimedia experience in which high-resolution K-1 photos are overlaid and placed into the full 360-degree scene captured by the Theta camera.

First demoed at this year’s CES expo in Las Vegas, nevertheless, this was the first time I’d come across the technology, and the large multi-display set up to demonstrate the capabilities struck me as rather impressive and all-around quite interesting.

The process, as I understand it, involves mounting the Theta to the hotshoe of the DSLR, in this case a K-1, and then capturing media with both cameras simultaneously. Then, the files are uploaded to a cloud-based image processing program that analyzes the 360-degree scene and then stitches-in the high-resolution DSLR images over their corresponding locations within the spherical panorama. Even more, the system can also embed videos shot from the K-1 into the spherical panorama scene, which will playback while you pan and zoom around the scene.” “Another visual revolution could be beyond the frame. Both are different but both can help users to enjoy some new creativity. That’s why Ricoh governs both areas as one business group.’

Mr. Saiki seems to be in a bullish mood, buoyed by the market response to the K-1. ‘The reaction to the K-1 has been beyond our expectations,’ he says: ‘not only in terms of sales but also in the words we’re hearing from users. We believe we can revive Pentax as the leading company for DSLRs. We’ve had lots of feedback from non Pentax users, who wanted to be able to enjoy our FA Limited lenses. That’s nice feedback to have.’”

Ricoh Imaging Company is pleased to announce the launch of “THETA+ Video” for Android, an Android app version of the THETA + Video app for editing video captured with the RICOH THETA 360° camera. 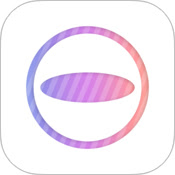 “THETA+ Video” makes it easy to edit and process 360° video captured with the RICOH THETA S and RICOH THETA m15 and time lapse videos created with the currently released app, THETA+. It enables actions such as trimming, switching the view, changing colour tone, and inserting background music. Video can be cropped to the preferred angle then posted and shared on social media channels such as Instagram and Facebook.  Editing as 360° video without cropping can also be done and posted directly on Facebook. Moreover, videos posted on Facebook and YouTube can be rotated when viewed.

Users can choose how to view 360° videos. The app offers a selection of four viewing formats (Mirror ball, Little planet, Equirectangular, and Rectilinear). With the “Little planet” format, the video is reproduced in the form of small spheres floating in space.

The video can be trimmed to the desired length.

*Playback speed setting is only available on “THETA+ Video for iPhone”.

Users can select one of eight original tracks that are included with “THETA+ Video”, or a track of their own, and use it as background music for a video. The original sound source in the video can be switched to silent.

The newest firmware version for the RICOH THETA S is “Version 01.42”.

Overview of additional functions/fixes on v01.42

・Photos can now be taken using a self-timer (still images).*1

*1：When the THETA S is initialized in self-tiemr mode, videos cannot be taken.
*2：Requires the latest version of the smartphone app (iOS 1.6.0 or above, Android 1.6.0 or above).

・Photos can now also be taken while connected to PC via USB.

*While the THETA S is connected via USB and power is on, WiFi will switch off.

*How to Update your RICOH THETA

RICOH IMAGING COMPANY, LTD. is pleased to announce that its RICOH THETA (m15)/ RICOH THETA S 360-degree spherical camera and PENTAX 645Z medium format digital SLR camera have been selected as winners at the internationally respected iF Design Awards 2016, hosted by iF International Forum Design GmbH. Details of the awards are as follows. 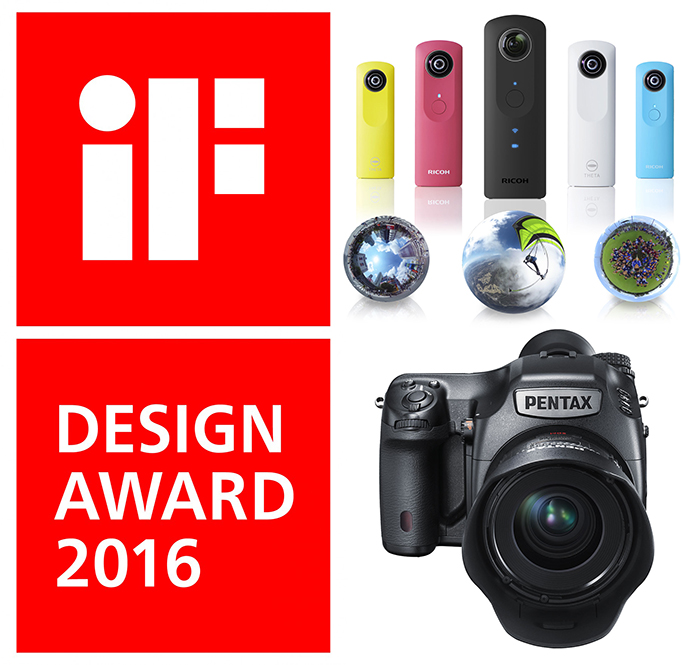 A series of RICOH THETA released in 2013, with the 360-degree spherical shooting function. Lineup models are the bright/colorful entry model THETA m15, for the joy of spherical shooting for various users’, and the high-end model THETA S with high functionality/ quality to extend the enjoyment. The series’ exterior design is for portability, easy shooting and simplicity. THETA S is completely free of unneeded factors by unifying parts, using a hidden LED display. With soft-feel texture, made of durable materials resisting aged deterioration by in-mold molding, THETA S presents a goal of both design and functionality.

Established in 1953, the iF Design Award is a design award presented to industrial products from all over the world that display superior design. Each year there are many applicants for the award from Germany and around the world. The winning products are selected from seven categories: “Product Design,” “Communication Design”, and “Packaging Design.” “Service Design”, “Professional concepts” and “Architecture” and “Interior architecture”. Winners are highly regarded as products with a superior design that is recognized internationally. This year 5,295 products from 53 countries were entered for consideration, and after rigorous examination, 1,821 products received awards.

“When the time came to pick the most unique camera of 2015, the Ricoh Theta S very quickly came to the fore. Sure, we’ve seen superficially-similar designs in past Ricoh Theta cameras, but the Theta S is a major update, and it deserves to be considered in its own right. Just a glance at the Ricoh Theta S is enough to tell you that it’s a very unusual camera, with twin fisheye lenses protruding from either side of its slim body, whose minimal user interface elements — there’s not even an LCD display — hint at a camera designed primarily to be controlled from your phone instead. 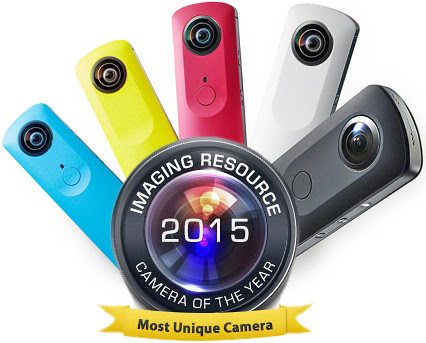 The duo of lenses allow the Theta S to capture an almost-complete 360-by-360 degree spherical panorama with a single press of the shutter button. And those photos are much, much better than ever before, thanks to a completely overhauled imaging pipeline. Nor is that all: For the first time the Theta S boasts a truly usable spherical panoramic video mode, too. The camera’s unique design does mean you’ll have to learn a whole new way to approach your photography, but that turns out to be a surprisingly fun and involving process. And there’s a major reward for your efforts waiting in the wings: Those spherical panoramas will put you right back in the moment in a way that a flat still image just can’t. We had a whole lot of fun shooting with the Ricoh Theta S, and we’re confident that you will, too!”

“The Ricoh Theta S is a first-of-its-kind spherical imaging camera that captures 360-degree scenes surrounding the user. It produces photos and videos that enable viewers to see the entirety of a scene by scrolling up, down, sideways and all around in the resulting image.” 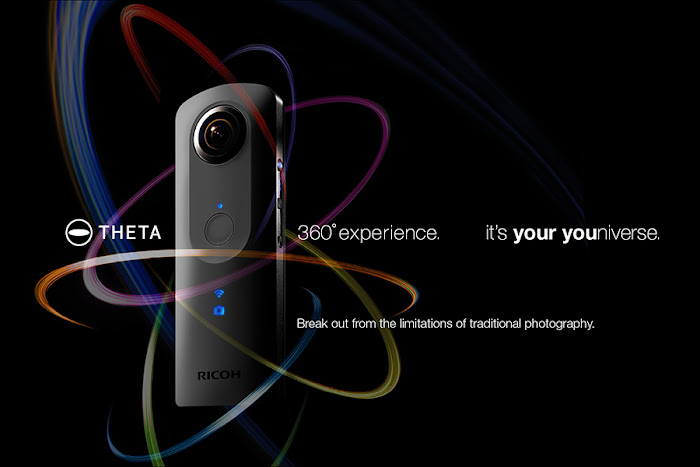 NEW YORK, Nov. 10, 2015 /PRNewswire/ — Ricoh Imaging Americas Corporation today announced that it has been named a CES 2016 Best of Innovation Awards Honoree for its Ricoh Theta S 360-degree camera. Products entered in this prestigious program are judged by a preeminent panel of independent industrial designers, independent engineers and members of the trade media to honor outstanding design and engineering in cutting-edge consumer electronics products across 27 product categories.

The Ricoh Theta S is the first truly 360 degree spherical camera that captures the entirety of a scene in a high-resolution photo or video, in a sleek, pocket-sized design. The Ricoh Theta S captures high-resolution spherical images of nearly 14 mega-pixels and records HD video at 30fps, with a maximum recording time of 25 minutes. Its high quality images are enabled by an enlarged image sensor and fast F2.0 lenses that allow more light through Ricoh’s proprietary ultra-small twin-lens folded-optical system. The spherical images can be uploaded to theta360.com, shared via Facebook, Twitter and Tumblr, and posted to Google Maps, Google+ and YouTube’s 360° Channel.

The Ricoh Theta S is the brainchild of Ricoh’s Visual Revolution or VR division, an organization that is focused on developing innovative consumer imaging technologies. The camera’s combination of small size, high quality imagery and incredible functionality are a result of Ricoh’s many decades of experience in advanced imaging and optical technologies. The company has long been a leader in professional printers and copiers, and is known for its high-quality optics and optical components. A key achievement with the Theta series is an ultra-small twin-lens folded-optical system capable of capturing two wide-angle images and then marrying them into a single spherical image.

“We’re thrilled that the Ricoh Theta S was named a CES 2016 Best of Innovation Honoree,” said Jim Malcolm, president, Ricoh Imaging Americas Corporation. “360-degree imaging is an exciting and emerging field that will only continue to grow in popularity as platforms like Facebook, Google and YouTube expand content viewing and sharing technology.”

The prestigious CES Innovation Awards are sponsored by the Consumer Technology Association (CTA)TM, the producer of CES 2016, the global gathering place for all who thrive on the business of consumer technologies, and have been recognizing achievements in product design and engineering since 1976.

The Ricoh Theta S will be displayed at CES 2016 January 6-9, 2016, in Las Vegas, Nevada. Best of Innovation Honorees will also be displayed at CES Unveiled New York, which features dozens of exhibitors and networking opportunities and runs 4:30-7:30 pmNovember 10, 2015 at the Metropolitan Pavilion in New York.

Entries are evaluated on their engineering, aesthetic and design qualities, intended use/function and user value, how the design and innovation of the product directly compares to other products in the marketplace and unique/novel features present.

Products chosen as CES Best of Innovation Honorees reflect innovative design and engineering in some of the most cutting edge tech products and services coming to market.