The New RICOH THETA – capture 360-degree images and videos in just one shot!..

Ricoh Company, Ltd. announced today that it has developed a new model of the RICOH THETA （Model code: RICOH THETA m15）, an input device that allows users to capture the area all around them in a single spherical image. The new spherical camera, which can also capture spherical videos, will be marketed by RICOH IMAGING COMPANY, LTD.

Since its launch last year as the world’s first image input device*1, the RICOH THETA has opened a new world of imaging possibilities. Users can shoot game changing new spherical images at any time, capturing more than they ever imagined. In response to popular demand, the new model enables Wi-Fi transfer that is almost twice as fast as the previous model as well as spherical video capture, all with the same small, lightweight and easy-to-carry design as before. Video image conversion processing can be performed on a computer after shooting, enabling users to enjoy up to 3 minutes*2 of spherical video footage that will make them feel like they’re right there. Users can also choose from four body colors, providing a more fun and attractive tool to carry around every day.

An API (Application Programming Interface) and SDK (Software Development Kit) (beta version) will be released on theta360.com along with the release of the new RICOH THETA. Users can now develop their own original apps to configure various settings and perform various operations using the RICOH THETA. By developing their own apps, users will be able to add new exciting capabilities to their RICOH THETA. Ricoh looks forward to broadening the range of enjoyment available through this unique device.

*1…The first consumer product that allows the entire area around the user to be captured in one shot, instead of simply taking horizontal panoramas or semi-spherical shots. (As of October 2013. Ricoh research)
*2…Upload to sharing sites is up to 5MB ≒ 6 seconds (1280 x 720 pixels)

The RICOH THETA m15.  This incredible device allows users to capture the area all around them – not forgetting above and below – all in a single spherical image. But that’s not all; this new spherical camera can also capture spherical videos!

Since the launch of the original RICOH THETA launch last year, the world’s first image input device has opened a new world of imaging possibilities. Users can now shoot game changing spherical images and video at any time, capturing more than they ever imagined.

The RICOH THETA m15, can now capture spherical videos up to three minutes in length with no stitch lines so you can share footage with your contacts that will make them feel like they’re right there! 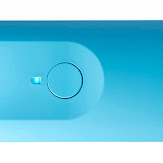 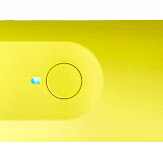 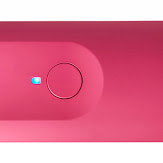 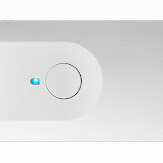 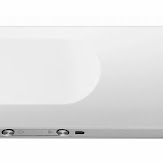 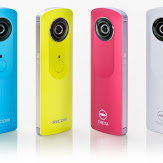 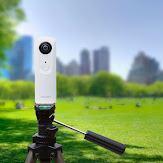 It allows users to capture the area all around them in one shot. Images are then transferred to a smartphone via Wi-Fi where the user can change the size, shape and composition with simple fingertip operations using a free dedicated app. Users can also change the RICOH THETA shooting setup by a smartphone which is connected through Wi-Fi. – Images can be uploaded to the theta360.com dedicated website, and can also be shared on social media sites such as Facebook, Twitter and Tumblr, as well as Microsoft®’s Photosynth®. Spherical images can also be posted to Google Maps and Google+.

By adopting new parts and utilizing a video control program, spherical videos up to 3 minutes in length can be shot. After shooting, spherical videos that have no stitch lines can be enjoyed by processing with the video creation tool*3 in the dedicated application. The image size, shape and composition can be changed using simple fingertip operations.

Videos can be uploaded to the theta360.com dedicated website, and can also be shared on social media sites such as Facebook, Twitter and Tumblr. (Up to 5MB).

Wi-Fi transfer speeds have been increased by a maximum of 2x. Users can enjoy smooth and serial shooting image transmission.

In addition to the previous white color, RICOH THETA is now available in pink, yellow and blue.

API/SDK will be available for users to develop their own original apps on theta360.com site. You can now create your own RICOH THETA apps, arranging function settings and operation. API/SDK will be released on 14th November and applicable to the conventional model also.

By attaching on the tripod socket hole on the bottom, a strap can be set.